As the new Jungle Book movie is released, tribes across India are being illegally evicted from their lands because they’ve been turned into tiger reserves. One of these places is the iconic Kanha Tiger Reserve, the inspiration for Rudyard Kipling’s original novel, from where hundreds of Baiga and Gond tribespeople were illegally evicted in 2014.

As the new Jungle Book movie is released, tribes across India are being illegally evicted from their lands because they’ve been turned into tiger reserves – while fee-paying tourists are welcomed in.

One of these places is the iconic Kanha Tiger Reserve, the inspiration for Rudyard Kipling’s original novel, from where hundreds of Baiga and Gond tribespeople were illegally evicted in 2014. And forced evictions are once again being threatened in the nearby Achanakmar reserve, despite fierce opposition, and in Amrabad, among others.

Kanha markets itself as the “inspiration” for The Jungle Book, and encourages large-scale tourism on the grounds that “nowhere can you see [tigers] as often.” But few visitors or viewers of the Disney film will be aware of the violence and intimidation inflicted on tribal peoples in the home of The Jungle Book in the name of tiger conservation.

The Forest Department claims that tribes accept “voluntary relocation”, but in reality they are coerced into “accepting” eviction with bribes and the threat of violence. Some are moved to government resettlement camps, but others are simply pushed out and forced to live in abject poverty on the edges of their territory.

Following the Kanha forced evictions in 2014, one Baiga man said: “We were one of the last families to resist. But the people from the reserve forced us to leave. They told us they’d take care of us for three years, but they didn’t do a thing. Even when my brother was killed, no one came to help us.”

Another Baiga tribesperson said: “We are lost – wandering in search of land. Here there is only sadness. We need the jungle.” 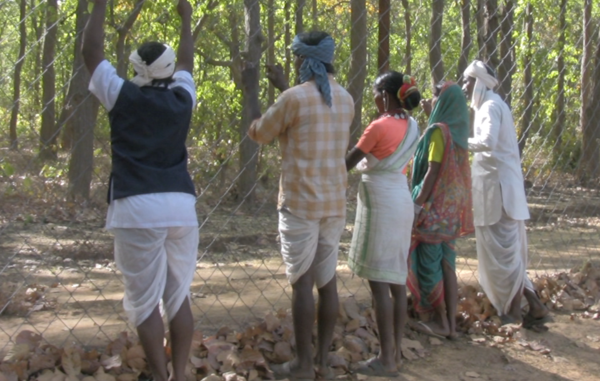 The big conservation organizations are guilty of supporting this. They never speak out against evictions. But many Indian tribes actually revere the tiger, and have lived peacefully alongside them for generations. There is no evidence that evictions protect tigers; in fact they’re more likely to harm them by alienating local people from conservation efforts.

Tribal peoples are the best conservationists and guardians of the natural world. They should be at the forefront of tiger conservation, but instead, they are being excluded. There is even evidence of more tigers living in areas where the people have not been thrown out.

Survival’s director Stephen Corry said: “We hope that this film helps bring some attention to the suffering currently being inflicted on tribal people across India in the name of tiger conservation. When India’s tiger population crashed in the last century it had nothing to do with tribes. It happened thanks to rapid industrialization and the wholesale slaughter carried out by colonial hunters and Indian elites. Yet all over India, tribes are paying the price for this: They’re kicked off their ancestral land to be replaced by tourists in their thousands.”

RELATED
Revealed: 62 killed in Indian park hosting royals
The National Park and tiger reserve that Prince William and Katherine will visit this week is the focus of a brutal shoot to kill policy that has seen 62 people shot dead by wildlife guards in just nine years. Kaziranga National Park in Assam state has become infamous across India for its extrajudicial executions. Armed guards summarily execute anyone they suspect of poaching, and local people are reportedly offered cash rewards for informing on people they suspect of involvement. The guards are given immunity from prosecution.

Revealed: Tiger numbers INCREASE when tribe stays in tiger reserve (2015 article)
Startling new data reveals tiger numbers have increased rapidly in the first reserve in India where local tribes have won the right to stay. The information, which the Indian National Tiger Conservation authority originally tried to suppress, discredits government policy to remove the many tribes whose lands have been turned into tiger reserves. Between 2010 and 2014 the tiger population in the BRT Tiger Reserve in Karnataka state almost doubled, from 35 to 68. Unlike elsewhere in India, local Soliga tribespeople have been allowed to continue living alongside tigers, even in the core of the reserve. This increase is far higher than the national rate at which the tiger population is growing.

Indian tribe secures unprecedented rights to tiger reserve (2011 article)
In a landmark victory, a tribe in India has for the first time had their right to use their ancestral land recognized – even though it is inside a tiger reserve. In 1974 members of the Soliga tribe were evicted from their homes in the Biligirirangan Hills, Karnataka state, by a local government intent on protecting the state’s wildlife. But now the Soliga’s right to collect, use and sell forest produce from within the Rangaswami Temple Sanctuary reserve has been formally confirmed.

«« Gail Tverberg: Globalization is reaching its limits; here’s why

Forest rights: The arrogance of the ignorant

Dhruv Rathee: Environment is the Modi government’s most under-reported disaster

India is not ‘self-destructing’ – it’s being destroyed systematically